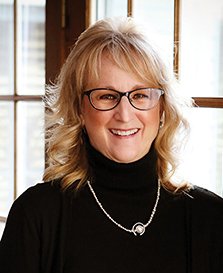 Cathy Engelkes is thankful that she listened to her intuition.

“I just had a feeling that something wasn’t right,” she said, despite having two prior screenings for colon cancer that were clear.

“My maternal grandmother passed away from colon cancer when I was in the fifth grade. I remember my mom and two aunts always had to get checked and I’ve always been really concerned about it,” she said.

It was a few years before Cathy was eligible to have another colonoscopy so she picked up a free in-home colon cancer screening kit offered by Sarah Bush Lincoln at the local Rural King. She debated on the need to turn it in for a few weeks, but she finally did so at 5 pm on the final day possible in 2017.

Cathy received a call the very next day saying she had blood in her stool so she immediately scheduled a colonoscopy with Sarah Bush Lincoln Gastroenterologist Alexis Ayonote, MD. While the procedure was painless and the prep not as bad as she anticipated, Cathy was shocked to learn that she had six polyps, three of which were precancerous.

“I was shocked and devastated. If I hadn’t done that kit it’s hard telling what would have happened. I would probably have had colon cancer,” she said. “I’m just lucky that I did that kit and I’m grateful that Sarah Bush Lincoln offers them for free. I wish everyone would take advantage of the opportunity to get one.”

Cathy received peace of mind after learning that Dr. Ayonote was able to remove all six polyps during the procedure, even though a couple were difficult to reach. “Dr. Ayenote was awesome and everyone out there was just so nice,” Cathy said. “I was really scared because I just knew that with my family history there was something that wasn’t right.”

Cathy’s advise to others is “Don’t wait! It’s well worth having a colonoscopy to avoid having to go through surgery or cancer treatments. I would say getting the colonoscopy probably saved me from getting cancer.”

Gastroenterology nurse Carrol Gottfriedt, LPN, encourages those who may be reluctant to have a colonoscopy for any reason to pick up a free screening kit. “It’s a very simple test, and you can do it in the privacy of your own home,” she said. Sarah Bush Lincoln is offering free colorectal cancer screening to make sure financial costs – or other factors, such as personal embarrassment – do not prevent people from getting a potentially life-saving screening for colon cancer.

Beginning at age 50, both men and women at average risk of developing colorectal cancer should undergo screening for colon cancer. However, 23 million Americans between the ages of 50 and 75 aren't getting screened as recommended. As a result, colorectal cancer remains the second-leading cancer killer in the United States.

“It’s well worth the time and any possible inconvenience to have the screening,” Dr. Ayonote said. “Too many people think ‘I’m healthy so I don’t need to do anything.’  In its early stages, colorectal cancer has no symptoms. By the time people notice bleeding, bowel changes and bloating, it’s often too late.” Routine screening could save an estimated 30,000 lives each year, according to the American Cancer Society.

For more information, or to make an appointment at SBL Gastroenterology and Special Procedures call 217-258-4155.