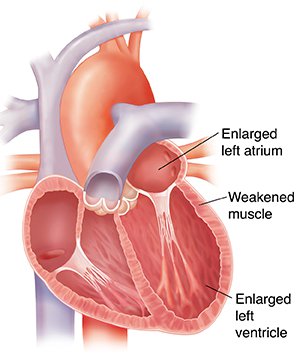 Dilated cardiomyopathy (DCM) is when the heart chambers enlarge and lose the ability to contract. It often starts in the left bottom chamber (ventricle). As the disease gets worse, it may spread to the right ventricle and to the upper chambers (atria). As the heart chamber widens, it becomes weak and doesn’t contract well. Eventually, the heart can’t pump as much blood as it normally would. This causes fluid to back up in the lungs and build up in the body. This is called heart failure.

DCM is somewhat uncommon, but it’s not rare. It affects men more often than women. It tends to occur in adults 20 to 60 years old.

Many different causes can lead to DCM. They include: