The DAISY Team Award is a concept brought to us by DAISY Award Partner Thomas Jefferson University Hospital in Philadelphia. It recognizes that while an idea to achieve better patient and family outcomes may start with one individual, it often takes an entire team to implement successfully. The DAISY Team Award is designed to honor collaboration by two or more people, led by a nurse, who identify and meet patient and/or patient family needs by going above and beyond the traditional role of Nursing.
Nomination deadline: July 1, 2023.

Selection criteria include the following:

Some examples of extraordinary collaborations that may be honored with The DAISY Team Award include:

Nominations received for these teams will be held and reviewed annually by the DAISY Committee. An internal call for nominations will be made prior to this review to give staff an opportunity to nominate eligible individuals.

DAISY award presentations are meant to be joyful occasions. The recognition ceremony, coordinated by the DAISY Committee, will be held at the annual DAISY banquet in September.

Gifts to each DAISY Team Honoree include: 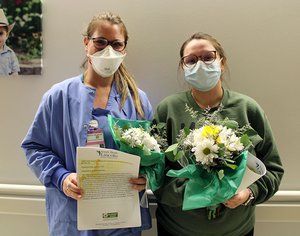 The DAISY (Diseases Attacking the Immune SYstem) Award is an international recognition program that honors and celebrates the skillful, compassionate care nurses provide every day. The DAISY Foundation was established by the family of J. Patrick Barnes after he died from complications of the auto-immune disease ITP in 1999. During his hospitalization, they deeply appreciated the care and compassion shown to Patrick and his entire family. When he died, they felt compelled to say “thank you” to nurses in a very public way. Please say thank you by sharing your story of how a nurse made a difference you will never forget!

This nurse-led team exemplifies Sarah Bush Lincoln’s mission, vision, and values and are role models of collaboration and teamwork that made a difference in the lives of patients, families, employees or your community.

We respect and safeguard your privacy. This form is secure.