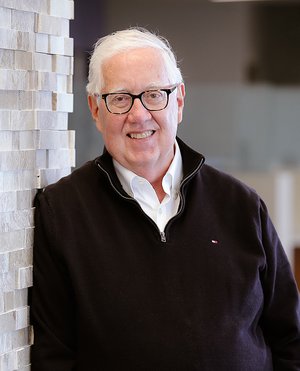 Eric Benson learned about his heart murmur at nine years old, but he didn’t let it stop him from living a normal life. Instead, he managed his heart condition by paying close attention to his body and not over-exerting himself when he participated in physical activities, such as intramural sports and jogging. It was nearly four decades before Eric experienced the serious side effects of his condition.

While at graduate school at Michigan State in 1976, Eric met his wife, Anne. They married and moved to Houston— their first stop in a long line of big-city moves, including stays in Washington D.C., and Chicago. When the vice president of Human Resources position opened at Sarah Bush Lincoln in 1999, Eric accepted the role and the family moved to its first small town.

“There were fewer places to eat in Charleston, but my eight-minute drive to work made up for it, especially after years of long commutes,” Eric mused.

Right after the 9/11 terrorist attack, Eric was walking across Sarah Bush Lincoln’s campus talking to a colleague when he realized that he felt so winded that he might not make it to his destination. He originally suspected that he might have asthma, but that walk was the wake-up call he needed to tend to his heart. The problem was quite serious.

“After that, I decided to stop being stubborn and seek help for my heart. I was getting tired more easily, and I needed to figure out what was wrong with me,” Eric explained.

He had congestive heart failure, a shocking diagnosis for a 46-year-old who lived a healthy lifestyle and never smoked. Eric was hospitalized to get his condition under control, when Cardiologist B. Lakshmi, MD, visited him to discuss the treatment plan.

“His professionalism gave both my wife and me solace. He didn’t sugar-coat the real issue that my heart was in distress. There was a comfort level from the beginning,” Eric recalled.

He spent five days in the hospital and, afterward, he began the METS cardiac rehabilitation program. Eric took up daily walks and removed the excess salt in his diet by making special breads and soups. His aggressive treatment paid off; within six months, his echocardiogram showed major improvement. “Dr. Lakshmi would see me in the hallways, and he would joke and say he had never seen someone recover so quickly. I felt much better at that point,” Eric insisted.

The treatment boosted his health, and he remained stable until seven years later when Eric experienced further heart complications. “Going up a simple flight of stairs and being winded was not common for me at that time. I started having ventricular fibrillation,” Eric said. His heart was out of rhythm.

Eric was told to wait six weeks to receive a blood thinning medication, but he couldn’t wait that long. Four weeks later, a significant respiratory issue drove him back to the hospital, where doctors performed a cardioversion.

“Dr. Lakshmi was out of the country, but he made sure to call me while I was in the hospital. That’s just the kind of guy he is,” Eric remarked.

Despite moving to Bloomington, Indiana, Eric drives back to Sarah Bush Lincoln every few months for Dr. Lakshmi’s care. He received a pacemaker in December 2021, which can shock his heart back into rhythm to prevent heart attacks. The device also collects data on Eric’s heart rhythms and beats.

“My heart data goes directly to The SBL Heart Center staff to examine. That is a huge comfort,” Eric explained.

“Dr. Lakshmi tells me he wants to get me to 90 years old. He doesn’t always jump to procedures. He is conservative and thoughtful with his care. I think that type of empathy is crucial in delicate situations. And he always asks me how my family is doing at every visit,” Eric said.

Eric now carries on his activities such as walking, attending plays and spending time with his family, knowing he has constant heart monitoring and a team of medical providers ready to care for him when he needs it.

For more information about The Heart Center, or to make an appointment with Dr. Lakshmi, call 217 238-4960.