What is a pacemaker?

A pacemaker is a small device implanted in the chest. It sends electrical signals to start or regulate a slow heartbeat. It’s most often placed in the chest just under the collarbone. A pacemaker may be used if the heart’s natural pacemaker (the SA node) is not working properly causing a slow heart rate or rhythm, or if the electrical pathways are blocked.

What is an implantable cardioverter defibrillator (ICD)?

An implantable cardioverter defibrillator (ICD) looks similar to a pacemaker, though slightly larger. It works very much like a pacemaker. But the ICD can send a low-energy shock that resets an abnormal heartbeat back to a normal. It can also send a high-energy shock if an arrhythmia becomes so severe that the heart can’t pump at all. 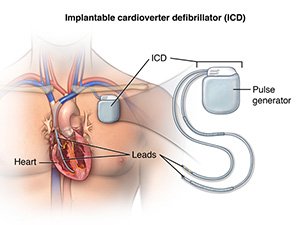 Many devices combine a pacemaker and ICD in one unit for people who need both functions. After the shock is delivered, a “back-up” pacing mode is available if needed for a short while.

The ICD has another type of treatment for certain fast rhythms called anti-tachycardia pacing (ATP). This is a fast-pacing impulse sent to correct the rhythm. This can be used instead of shocking the heart in some cases.